What features players want to be included in FS22? 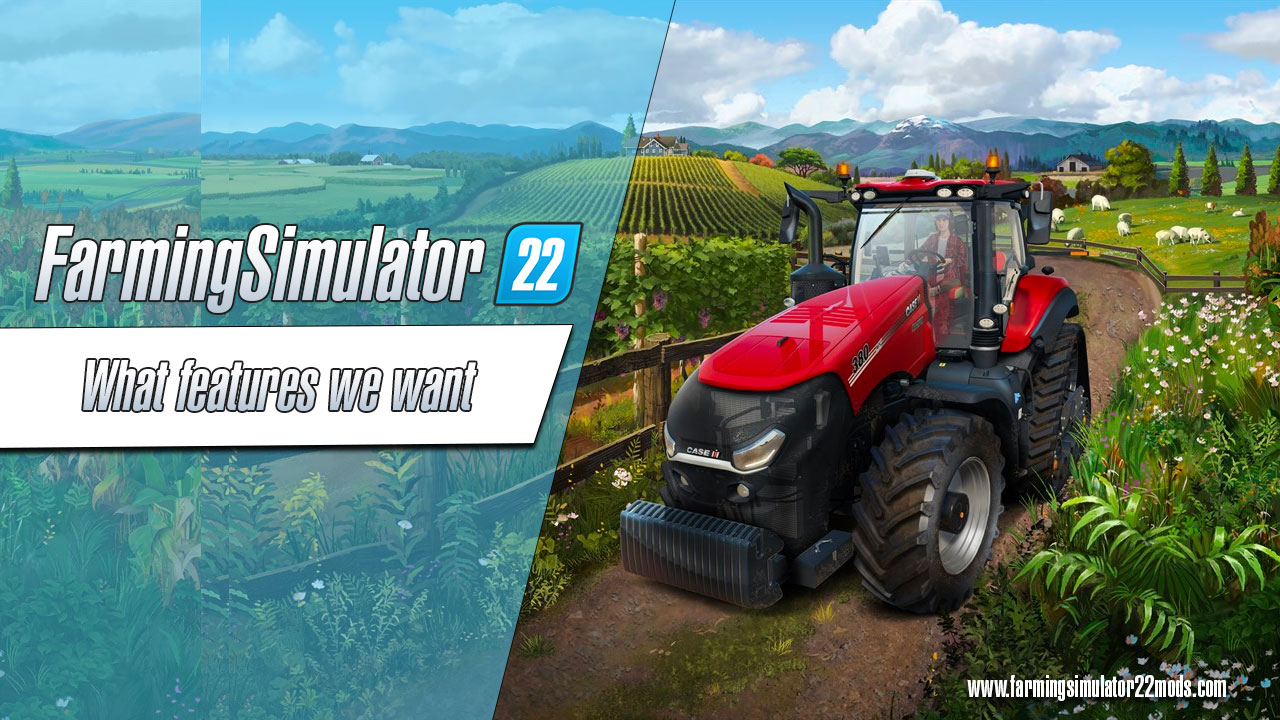 What features players want to be included in FS22?

Farming Simulator fans were asked what features they want to see added to the new FS22. Here’s what they said:

At the moment, people with different devices cannot play FS together, meaning Xbox players can only play with other Xbox players and the same goes for Playstation and PC owners. Having a crossplay feature would definitely improve the overall experience of the game. There are examples showing that this kind of feature is totally possible, like Fortnite and Rocket League. Will we see this feature in the FS22? We don’t know, but it would be cool!

There can never be too many improvements to the game. With FS19, a lot of new features were introduced, but there’s still a lot of things missing. A better mod menu and a search function would certainly be welcome improvements. Other than that, the players would like to be able to fasten the vehicles onto the low loader. The construction tool could also use some improving and the vehicle physics could be more realistic. The selection of placeable objects designs for the courtyard could also be expanded. These may seem like small improvements, but together they would enhance gameplay a lot.

In the Farming Simulator, you have to buy your vehicles, machinery and equipment new. While there are a lot of real farmers in the world who can afford to always buy new machinery, not all of them can do that. In reality, lots of farmers buy used farming equipment. If your bank account in FS is not looking too good, you should be able to purchase used machinery. A second-hand tractor could have rust or worn seats, but it’d be cheaper and still get the job done. It would also be interesting if the Farming Simulator allowed you to change tires. It would bring a whole new experience to the game!

In the FS19, if you plow and fertilize your fields according to rules and regulations, a fruitful harvest should be a guarantee. However, in reality, animals like moles often ruin the harvest. The players said that they would like to see wild boar or deer in the forest or in the field ever so often. This sort of change would not only lead to a more realistic world but also improve the overall appearance of the game.

In the FS19, you can do quite a lot with trees, like plant them, sow them off, chop them. While the game is focused on agriculture, there’s a surprising amount of things you can do with wood. However, there’s still some room for improvement as not much advancements have been made since FS15 in forestry. It would be cool if you could drive your jeep on muddy roads in the forest and then mark the trees you want to cut.

The vehicles in the FS19 look good and have lots of configurations, but if you compare it to real vehicles, there’s still so much to improve in the game. The players would like to see a GPS function which would allow tractors and other machinery to be driven over the field precisely. Other than that, what would also be cool is actual usable buttons, manual coupling, license plates that you can change, a passenger feature, and adjustable seat heights. Sure, not everything on this list is easy to implement, especially on consoles, but some of these features have been requested by players so much that perhaps something could be done!

In the Farming Simulator so far, you’d have to drive to the sales station with the best price after your harvest. In the station, the harvest is quickly unloaded and you instantly get the money. That might seem like it’s enough, but in reality it would be more interesting if the process would be more intricate. Players would like to see a traffic jam in front of the mill, document checking, or even taking grain samples before selling the harvest. There could be improvements related to pricing as well, for example, a price change depending on supply. If the season was good and everything went smoothly, the crops would be cheaper; if the season was harsh with rain and storms leading to a smaller amount of crops, the price would increase. Imagine the new possibilities this would offer to the FS22! You would have to manage your money strategically, sign contracts for stable prices and more.

No other improvement has been requested more often than more mods on consoles. The challenge of implementation definitely falls on the shoulders of GIANTS because it’s not the FS developers who are responsible for mod restrictions. In this case, Sony and Microsoft are to blame – they do not allow script modifications. Sadly, this means that console players miss out on a lot of interesting and useful mods. What console players have are mods without scripts that are released via Modhub. And even if the restrictions on the consoles are not lifted, there’s still something developers at GIANTS could do. Modders often say that it’s not easy to publish mods via Modhub. If the players manage to get this message to the GIANTS, maybe at least a few more mods will make it onto the consoles. But we wouldn’t be too optimistic about the change in script restrictions.

More life on the map

If you play in multiplayer mode, this might not be too much of a problem, but there’s still so much left to improve on the single player mode. For example, seeing neighbouring farms and tractors in fields in the distance would add a touch of realism and life into the FS22. What the game also lacks is more life in traffic, like speed cameras, vehicles involved in road accidents, passers-by who engage in conversation, flowers or even bees. Details like that would certainly improve the feel of FS22. And it might come to the game sooner or later because the creators themselves hinted at including more interaction with other people in the future. Sadly, this will not be implemented in FS22, but there’s hope for the next version.

People would like to see more realism in the FS22, like doors and stables in your farm breaking, paths that need to be mended and barns that need to be built. It would be nice if you could take some tools and repair some things sometimes. Also, an extended construction feature would be useful. The ability to design your own courtyard was a great feature in FS19. If the FS22 could implement more different objects, the construction mode would definitely be more fun for the players. More animal life is something that’s also missing and would make FS22 more realistic!

The Farming Simulator surely has a lot of partnerships with various brands, but some are still yet to be seen. The players have said they would like to see machines from Volvo, CAT, DAF, Iveco and, of course, Mercedes-Benz. There are also some smaller brands from Europe that would certainly be interesting to see in the game. However, in the end, there’s little to complain about because most important brands are already in the game!

New types of fruit and vegetables

In the FS19, horses were implemented and it was a very welcome addition. Now, it would be nice to see other farm animals, like goats, for example. However, the biggest weakness here is the lack of fruit and vegetables. So many are still missing from the game, like asparagus, tomatoes, strawberries, carrots, lettuce, cabbage, beans, leeks, onions, radishes, peppers, cucumbers, zucchini, pumpkin. The list of things that you should be able to grow in FS is endless! A lot of these vegetables would also add new machinery to the game because they require different processing. Depending on a vegetable, you would need greenhouses, farm workers, new equipment and cultivation methods. If such things were to be implemented, you would not only have to dump manure and water, but to interact more as well. There’s so much that can be done in this department so let’s hope that more fruit, grains and vegetables will be added in the FS22. Maybe someday we’ll even see raspberry, blackberry or gooseberry bushes or even the produce from all over the world like olives, rice, cocoa and others!

Processing options could also be expanded in the future implementations of the game. However, the talk about production always leads to endless discussions in the community: some want this new feature, but others say that the Farming Simulator should be focused on agriculture, not processing. It would be interesting to explore other fields, like breweries or bakeries because sometimes, upon seeing fluctuating milk prices, farmers open their own dairies. And that could definitely bring some new dynamics to the Farming Simulator.

Seasons and the weather change

As of right now, the Farming Simulator is all about sunshine and summer. It’s certainly idyllic, but far from realistic. Having seasons introduced to the FS would bring whole new challenges and experiences to the game. The change in weather on crops and animals should find its way into the FS22 (at least in a striped-down form). It could have an impact on growth, prices and fungal infestation. And, for example, if there was no rain for a long time, it could negatively impact the harvest.

We’ve already got cows, pigs, sheep and chicken – and it’s great! They all require different care that the players have to prepare for everyday. Various feed, grass, hay, straw, potatoes, maize – all of it is grown on cattle farms in FS19. And even though in the FS19 we were introduced to horses, it would be interesting to see goats in the FS22.

Fruit growing and viticulture is closely related to farming, but are yet to be seen in the Farming Simulator apart from some mods. Fruit growing offers great new opportunities for farmers: pruning and watering trees, driving through the rows of apple trees in a tractor, fruit cranes in autumn, selling apples or making apple juice. All of this sounds great, doesn’t it? It would also be nice to see the implementation of viticulture: growing them on steep slopes with special equipment, the harvest and processing into grape juice and wine. It all sounds so fun that this feature is definitely at the top of my wishlist!

Not going to lie, it would be interesting to get stuck in the mud with a tractor after a rainy week. The difficulty to drive on different terrain in different circumstances would definitely change the whole driving experience. Cultivation, plowing and sowing would also be more interesting than before! However, we know that there are major issues related to this kind of feature. As of right now, the Farming Simulator is a game that doesn’t require a powerful system to work splendidly. But if you introduce a dynamic floor, that all could change for the worse. And then there’s an issue of integrating this feature into the multiplayer mode – that poses even more challenges for the developers. Let’s hope that one day those challenges can be overcome and we’ll be able to experience a dynamic floor in all of its glory!

The fact that you can give annoying tasks to the helper in FS19 is great. However, the helper is not all that reliable. The helper often circumvents field edges widely, processes fields insufficiently or takes an early lunch break. It’s not a surprise that many players rely more on course play than on the helper. That has to change in the FS22. The helper not only should be more intelligent in the field, but should also have more functions. That way, players who play in the single player mode could be able to complete more tasks and also manage large farms at the same time.