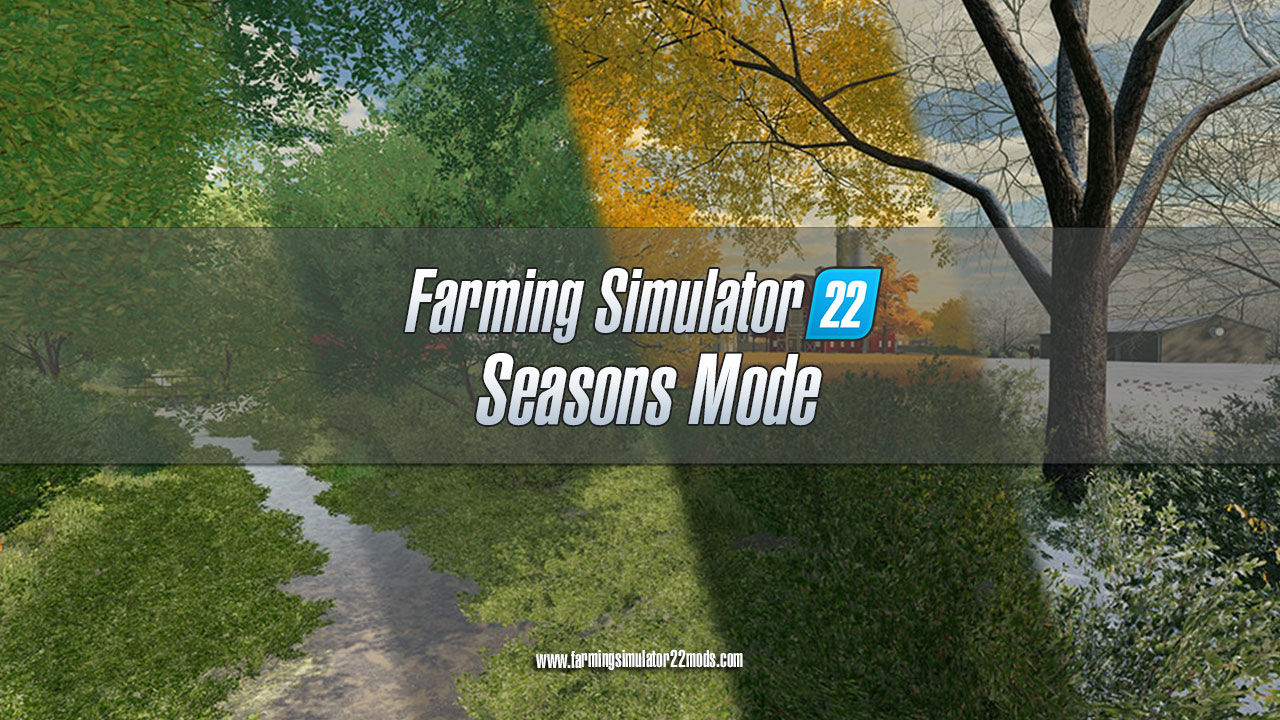 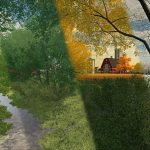 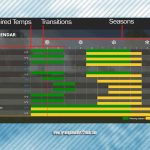 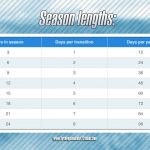 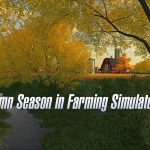 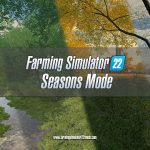 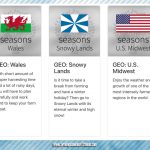 Farming Simulator 22 has announced that Seasons will be a part of the game. What does it mean?

The Seasons Mod should be known to every LS17 and LS19 player, but  Giants Software integrated its own version of the well-known Seasons Mod in the Farming Simulator 22, which differs from the Mod, this can be particularly interpreted with the answer – “It is more seasons than the classic Seasons Mod ”.

It could be (as was already expected) a kind of “Seasons light” to address the complex gameplay of the Seasons Mod for all target groups such as core & hardcore players. In the interview, Lisertan also said that, as in the previous versions of the Farming Simulator, it might be possible to deactivate individual functions.

This Seasons mod will help you make your game much more exciting and real. Actually, if you remember, this particular mod was the winner of the Farming Simulator 17 mods competition and has been among the top FS17 mods. It is very much an exciting mod to be waiting for by the community and the new version is really going to be loved by all the fans!

What was Seasons mod by Realismus Modding? It was a mod for Farming Simulator 19. Because of the season changes that it adds to the game, this mod makes your whole game feel more real. You will need to adapt your whole farming life cycle according to each season, which will definitely teach you how to be a better farmer and player in the game.

How does the Season mod work?

What this mod actually does is imitates the different seasons of the year. So, not only the weather is changing accordingly, but also the mods can switch up crops prices, the behavior of your animals, maintenance of your machinery, and harvesting cycle. The main goal of this mod is that you feel like a true farmer and actually start to think like a real one too because weather actually is a very big factor in how successful your farming will be.

How much does Seasons mod cost?

Like other mods, Seasons mod was free of charge and you can download it on the official modhub of Giants. Farming Simulator 22 will finally bring us four Seasons as a part of the game for free.

Is it available on PS5 and Xbox Series S?

Yes, this mode will be integrated into a basic Farming Simulator 22 game version which will come to PC, Mac, PlayStation 5, Xbox Series S, PlayStation 4, Xbox One, and Google Stadia.

Who has made older the Seasons mod?

Seasons mod was created by Realismus Modding – a team of five developers. This mod was so good and successful that the first version of it won an award in Farming Simulator 17 modding competition.

The team is made up of five amazing guys Per (mrbear), Jos (Rahkiin), Per (reallogger), Sebastian (theSeb), Stijn (Wopster). All of them were the winners of the modding contest in 2017 with then their first version Season 17.

Are you excited to try out Seasons? We will bring you all the guidelines that you need to try it out yourself.

How to install Seasons mod by Realismus Modding

This particular mod, Seasons mod, should be installed to the engine of the Farming Simulator. That is the reason why there might be some conflicts between mods if another one with similar functionality to Seasons is installed. So, in order to avoid this situation, have a good look at your mod folder.

If you want to do the following things, we suggest you remove your mods:

As soon as you make sure that those kinds of mods are removed from your mods folder, you can finally begin the game with Seasons. Alternatively, you can choose to create a new mods folder:

Right-click on your mods folder and press F2.

Switch the name of the folder to for example “ModsPause” or any other name that works for you.

Create a new folder and call it “mods” (make sure to have all letters in lowercase and check your spelling!)

Now copy the Seasons mod, all your other mods, and maps that you would like to use, and paste it to the new folder. If you want to really get how Seasons work in the game, just imagine real life and how seasons work. It’s all about transitioning from one to the other. And each season transits three times.

Just take a look at the menu of the mod – HUD (Alt + S – L1 + Options on consoles) and you will be able to view all the transitions. So, if we calculate that there are four seasons in total, then you will have 12 transitions. That is the best time for you, your harvest grows during that time.

The four seasons that you’re going to have are inevitable, that is the rule of the game. But if you want, you can modify the duration of each season. If you want to do that just click on the Seasons menu (Alt + S (L1 + Options on consoles)). The duration of the season can be from 3 to 24 in-game days.

Therefore, if we calculate this for you, let’s say you want your season to last only for 3 days, then each day you will have a transition. In this instance your whole year will only be 12 days long.

So, if you want the season to be 24 days, then in that instance you will experience transitions every 8 days. A whole year then would be like 96 in-game days.

The table below will help you to calculate all the season lengths: Some tips: You need to check out the lengths of seasons when you start each of your games. This is because when we first used the mod, we noticed that the default season length was set to 6 days. You need to first select the length that you want and then start the game.

The game always starts in springtime, Season 22 also resets all of your fields and this is something that is set for your game that nobody can switch up or change. You can use this mod with most of the maps even with the ones that haven’t been updated. Also, you might notice that if your maps are not updated, the snow will look good. Therefore, we highly suggest that you always take care of your maps before winter.

Have a look at some maps that have nice snow masks:

If you want to look for more Seasons 22 maps – check them out here. But let us warn you first that we haven’t tried them yet.)

Since spring comes first in the game, everything is fresh, new, all the old crops are removed. This means that you need to begin your new year with all the new farming routine tasks – plowing, sowing seeds, and cultivating the field. Don’t forget to spray your land for herbicides at this time!

Later in the year, you will need to perform the following tasks:

Winter: The maintenance of your vehicles and feeding your farm animals. Some tips: Wintertime is very good for doing forestry work and it makes sense – lots of farmers do it in real life actually.

What are GEO Mods? If you have played Farming Simulator before, you probably know already that GEO mods were a thing in FS19 already, so after a few years now, we have so much more to offer!

Seasons are all about the current weather conditions. The creators of the game really wanted to make the experience of the game as real as it can. It tries to mimic the real world as much as possible, hence the weather changes a lot. Also, as it is in the real world, the weather in different parts of the world at the same time is different. This is where GEO mods come to play.

GEO or geographical in other words, mods adjust the weather according to the exact conditions that it is in different areas of the globe. In addition, this specific mod has other very useful and interesting capabilities such as changing the effect winter brings to your harvest, the length of day, the way crops grow. Previous Season GEO mods included Northern Sweden, US Midwest, South Australia and other regions.

If you start playing Seasons without the GEO mods, then the climate is already chosen for you and it will be South of the UK.

Realismus Modding has created a number of GEO mods that are available for download:

Be careful with Fast Forward

You may think it’s a good idea to fast forward the time when you play Seasons 22. You may even feel like you could use the mod to speed up the time and make it fly super-fast.

It can be extremely tempting to fast forward your seasons in the game of Seasons 22. This all makes sense, right? You grow faster, hence you can harvest even faster and repeat the circle again in the same year meaning that you’ll earn more. However, as always you shouldn’t try to trick the game to your advantage this much because it can end badly.

Tips: As you already understood, do not overdo it with fast forwarding. According to the creators, Realismus Modding, do not do this faster than 6,000 x in single player, or 1,200 x in multiplayer. Why? Well, the main idea is quite simple – the faster you go, the easier it is to screw something up. Therefore, sometimes going slower actually is beneficial and you have more control.

We truly think that we covered all the most useful tips and tricks when using Seasons mod in your Farming Simulator 22 game. It is really an amazing mode, so don’t wait any longer, just try it and start your next adventures. If you feel like you want to know even more, then simply just have a look at more guidelines regarding Seasons.